May 23 is Lucky Penny Day, but pennies are fun any day of the year. Don't believe us? Try out some of these cent-sational ideas!

The water sealed the air in the bottle, and the heat of your hand then made the air inside the bottle expand, and the pressure of this makes the penny hop.

Two forces are at work here: hydrogen bonding and surface tension. Hydrogen bonding is a force that makes water form dome-like droplets on surfaces (it also is why water has a relatively high boiling point, why it has lower density when it is solid than when it is liquid, and why it is liquid at a wide range of temperature). Hydrogen bonds are not as strong as many other chemical bonds (like covalent bonds), but they make water molecules 15% closer together than they would be otherwise.

Surface tension is a result of cohesive forces between liquid molecules (that means they stick together!). The molecules on the top of the water drops do not have other molecules just like them all around them, and so they cling more tightly to the ones next to them on the surface. This makes them more resistant to outside forces.

Pennies can be used to build truly incredible structures. To begin, stack two columns of pennies, 10 pennies high. Then, you must make what is called a triad — three pennies stacked as a pyramid, with two lying flat next to each other and one lying flat on top of them. After you build a stack, place two triads on top of it. Repeat. Slide the two stacks together. Slide extra pennies in between the pennies in the triad to strengthen the structure.

Add another triad and more pennies. See this in action here.

To Play: Toss pennies toward a wall. The player whose penny lands closest to the wall wins (and perhaps keeps the other players' pennies!)

This game is played with two players and three pennies. To play, arrange three pennies in an upside down flat triangle in front of you on the edge of a table. The other player uses his/her fingers to create a goal and goalie at the other end of the table. Flick the back penny to make all three pennies move forward, and then flick the rear penny through the space created by the other two to move the penny down the "ice" toward the goalie. Repeat.

Place all of the pennies on a flat surface and lay them in rows. Make sure there are equal pennies in each row (so if you have 50 pennies, you could have 5 rows of 10, but not 5 rows of 9 and and a row of 5). You also need to make sure that the total number of pennies is not a prime number (when the game is over, see if you can figure out why).

Your arms and hands cannot touch any other part of your body or any other thing. If the penny touches the floor, you lose.

How to play:
Place the paper on a flat surface with the treats in each square. If the prize is too big for the square, place a small piece of paper on the square with the name of the prize in it.

Each player tosses a penny onto the paper, winning whatever prize is in that square. Play rotates among all players until all prizes have been claimed.

Pennies in the Bucket Relay

How to play:
This game needs at least six players to work well and is best played in an open area (inside or outside). Divide the players into two teams. Place the buckets or containers at one end of the playing area and have players stand at the other end. The first player on each team places a penny on top of his or her foot and walks down to the bucket. After reaching the bucket, the player must get the penny into the bucket without using his/her hands. The player then walks back to where the team is, and the next player goes. After two minutes (or some other time limit), the team with the most pennies in the bucket wins. 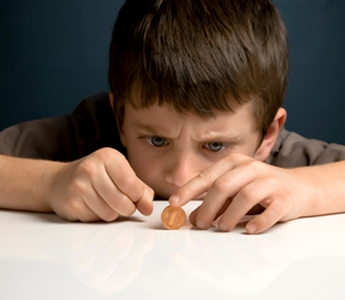