American Mensa and Hasbro have joined forces to celebrate learning. With that mutual goal in mind, Hasbro is relaunching some of its classic children's games, each featuring the Mensa For Kids logo and identifying learning elements for game-palyers. In conjunction, MensaForKids.org is featuring lesson plans that enhance a child's learning experience using game play as well as other activities that focus on learning elements highlighted in the Hasbro games.

This what is known as an open-ended question. This means that there is not a simple answer. The answer is open to your interpretation of events.

What students will know and be able to do by lesson’s end:

Most of history involves a series of events and you will need to use your critical thinking skills to predict the sequence — if there is one — of the events. Explore that idea using the DOWNSPIN game to learn to see how one idea/choice/action can influence or impact results several moves/days/centuries later.

Get into groups of two and play the game. Write out how the game can be compared to a great battle in history.

Determine the shortest amount of moves you could make to win the game. 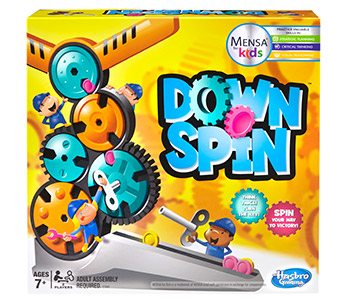