American Mensa and Hasbro have joined forces to celebrate learning. With that mutual goal in mind, Hasbro is relaunching some of its classic children's games, each featuring the Mensa For Kids logo and identifying learning elements for game-players. In conjunction, MensaForKids.org is featuring lesson plans that enhance a child's learning experience using game play as well as other activities that focus on learning elements highlighted in the Hasbro games.

This lesson plan works in conjunction with the MOUSE TRAP game, in which players learn how to use force and effort to move objects and how the relationship differs when events are set in motion. The act of playing MOUSE TRAP game can be a learning experience that lets students experiment with design elements, and it also lets them discover how simple machines work to accomplish a task. Students can learn how to work as a team and what it takes to construct a viable project.

Machines work by changing energy from one form to another. Force could be either a push or a pull. Using a simple machine we can multiply the amount of force we can apply to an object or change the direction in which an effort force was applied.

You must identify the load or the amount of force that has to be overcome to move an object. Additionally the effort, or amount of force we need to apply to move the object, needs to be known.

Simple machines help us decrease the effort required to move an object. Many complex machines are actually just compounded or made up of two or more simple machines working together.

After completing the lessons in this unit, students will be able to:

Work as a team to set up the game.

As you set up the game, identify how many and what types of simple machines you see/find in the construction of the game.

Construct a new version of the game using what you have learned create a board game using at least four types of simple machines (can be compounded) include all the parts and pieces and written instructions. 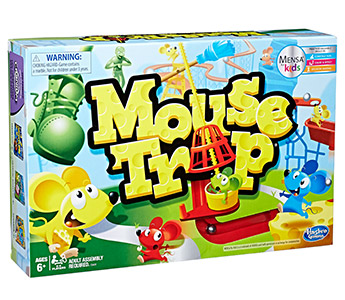