This lesson explores the classification system used to identify animals. Most children are fascinated by animals and often have an animal that is a particular favorite, possibly even an animal the child has never seen before. Children also like to order and sort things, and this lesson melds both of these interests.

This lesson is specifically designed to move quickly beyond the knowledge level to high-level thinking. This lesson can be taught to an entire classroom or given as a self-directed extension activity.

Look at the pictures of these animals, then fill in the chart below: (We’ve given you an example.)

Choose the two animals from your chart that you think are most similar and justify your choice in one sentence.

Lesson 2: Organizing the animals — how it happened 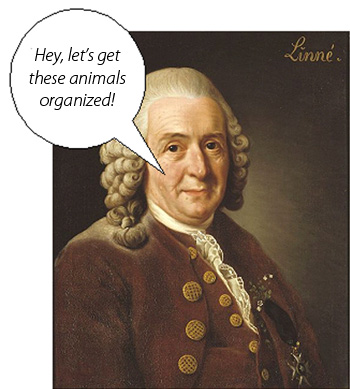 Back in the 18th century, a Swedish man named Carolus Linnaeus thought it was important to organize living things, and he developed a system to do just that. He started out interested in plants, but he ended up ordering all life as he knew it. We still use the essence of his system today. Scientists are constantly refining the system based on new knowledge. Who knows? Maybe you will make a change in how animals are organized!

Putting animals in order like this is called taxonomy. The taxonomists — people who name animals — use a book called the International Code of Zoological Nomenclature, or ICZN, to tell them the rules for classifying animals.

Every animal on the planet, down to the most microscopic creature you can imagine, can be classified according to this system. You can remember the order the system comes in with one of the following phrases. The first letter of each word is the first letter of the level of classification. Pick the one you like the best and practice saying it five times. 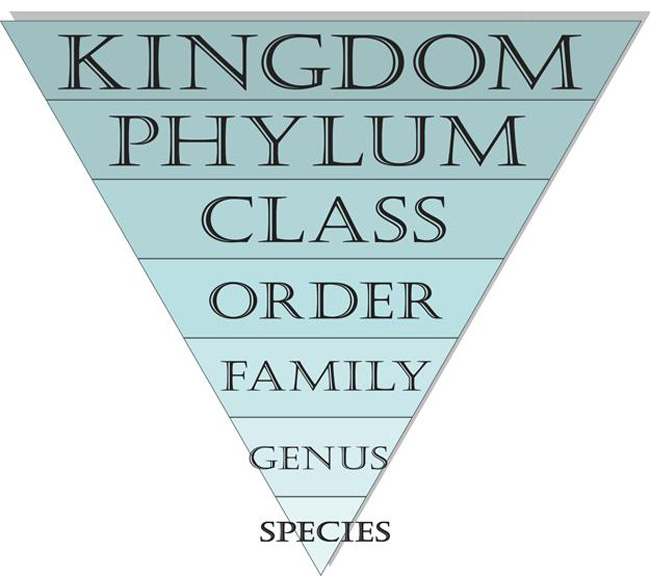 Let’s look at each level and an example using one common animal.

These levels start out broadly — that means the top levels have the most animals, and they get narrower and narrower as you go down. So, by the time you get to the species, there is only one animal in the group. You can imagine these levels as an upside-down triangle.

Kingdom
Generally, scientists agree there are six kingdoms. The animal kingdom (called Kingdom Animalia) is just one of those. In case you’re interested, the others are Achaebacteria, Eubacteria, Protists, Fungi and Plants. Originally, Linnaeus only identified two kingdoms: plant and animal. Some scientists think that viruses should have their own kingdom, but currently they are not included under this system.

Phylum
Within the animal kingdom, the animals are divided into more than 30 phyla (which is the plural of “phylum”). You might be interested in Phylum Chordata — it’s the one humans and all animals with backbones are in (do you see how “chordata” looks like the word “cord” — like spinal cord?). Phylum Arthropoda contains insects, spiders and other animals with segmented bodies, like shrimp. Arthropods have their skeletons on the outside of their bodies (think of the hard shell of a lobster) and other characteristics in common.

Class
The third level of classification is class. For example, Phylum Chordata has classes in it like birds, mammals (Mammalia) and reptiles.

Order
The next level, or rank, is order. Orders are smaller groups within the different classes. Lepidoptera is the order of moths and butterflies. Carnivora is the order within Mammalia that has the most diversity in animal size.

Family
The fifth rank of classification is family. (When you get to this rank, people sometimes disagree about which family an animal belongs to, so you may find that different sources tell you different things. This can even happen with orders.) The family for dogs is Canidae.

Genus
This rank looks like “genius,” doesn’t it? It’s the second-to-last rank, and a genus may have only one or two animals in it. If animals are in the same genus, they are really closely related. In fact, you may not be able to tell them apart just by looking at them! When we write the name of the genus, we capitalize it and italicize it. For example, the genus of dogs (and wolves, too!) is Canis.

Look back at your chart of the animals that you did in Lesson 1. Let’s see how they fit into what we’ve just learned. Using that chart and the chart on the last page of this lesson, answer the following questions:

Did you put the genus first with a capital letter? Good for you! When you see a species’ name written, it will be the genus and the species, so the scientific name is sometimes just called "species." Sometimes the genus will just be listed as a capital letter with a period after it, like this: B. musculus.

Lesson 4: Working with your favorite animal

Go to the University of Michigan Museum of Zoology’s Animal Diversity Web. In the search box, put in your favorite animal. Now write out its classification:

Look on the chart of animals in the previous lesson. Are there any animals on the chart in the same phylum as your animal? Same class? Which animal do you think is the most closely related to your animal?

Go back to the website and try to think of a few animals that would be very closely related to the first animal you chose and classified above. For example, if you chose “tiger,“ try “lion“ and “panther.“ How close can you get? Can you get down to the same family? How about genus?

What animal could you find that was closest to yours?

It’s not just animals that get organized. Think about the grocery store; is the cereal in the same area as the fruit? No, each type of food is in its own space. You can easily tell how the grocery store classifies its items for sale by looking at the signs above the aisles.

Now think about your house. Imagine that you needed to classify every item in your house. One way would be to use the ideas that Linnaeus had — to start out with broad categories and get narrower. Let’s try it!

You are going to devise a seven-level system for classifying the things in your house. If you get confused at any time as you are doing this, you can look at the examples listed later in the lesson.

Do you see how the groups get smaller and smaller, ending in a single item? That is what you are trying to do.

Here is an example of how one level could be broken down into several smaller categories. We’ll use the level family from above for our example. Notice how each genus is a smaller part of the family of Books.

Lesson 6: Create and classify your own animal

Imagine that you are a biologist studying animals in the wild. One day, while lying in your viewing spot, you see an animal you have never seen before. You rush back to your tent and look through your encyclopedia of animals, growing more and more excited as you realize that you have discovered a new species! As the discoverer of this new species, you get the honor of naming it. Of course, being a fantastic scientist, you will follow the classification system in place. That means that the only part of the animal’s name you will make up yourself is the actual species name.

You go back to the Animal Diversity Web to find the closest animal you can find to the one you discovered. For example, if the animal you have discovered looks a lot like a panther, look up "panther" on the website.

So get a clear picture of your animal in your mind. Is it a mammal? a fish? a bird? This works best if you create an animal that is similar to your favorite animal you chose earlier, but yet slightly different. Draw a picture of your new animal.

What is your species’ distinguishing characteristic?

After you have classified your animal, including creating a species name, go back and label your picture with one thing from each level that is unique to that classification. For example, if your animal is in phylum Chordata, draw a line to the animal’s backbone and write, "Phylum Chordata — backbone." Do this for at least four levels. Look back to the Animal Diversity website you used before to search each of those levels. It will tell you what characteristics are typical of that classification. You may also use an encyclopedia to help you.

See the example below. 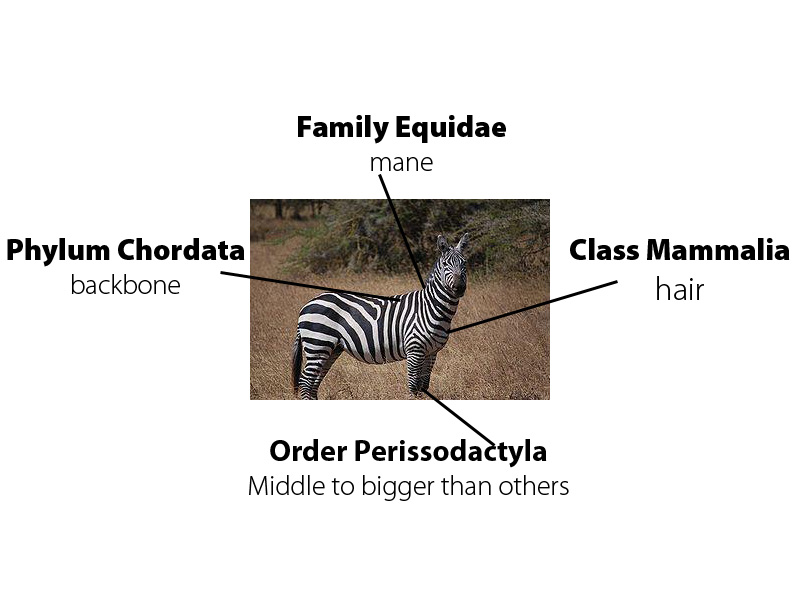 Because animals nearly universally interest children, there are myriad books on them geared to young readers. Included here are a few high-quality volumes that are distinguished due to quality of illustration, comprehensiveness of material, interest to gifted learners or classic nature.

Answers to Lesson 4: Working with your favorite animal

Rubric for Lesson 5: Classifying your house

Rubric for Lesson 6: Creating your own animal 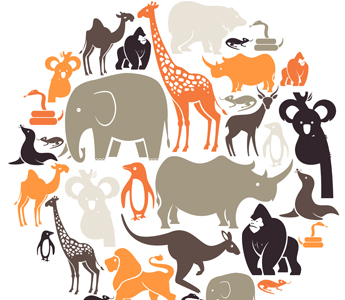