Kids find weather fascinating. Big storms, snow days and wind enough to fly a kite all hold their attention. Hurricanes, one of nature’s most destructive forces, are particularly interesting and lend themselves to independent exploration. The study of hurricanes rewards the young scholar with the ability to understand more about the forces that shape our world.

Learning Objectives
After completing this lesson plan, students will be able to:

Eventually, the residents of the biggest, most populated city in Texas would call it "The Great Storm," but that was years after the tempest was born off the coast of Africa in the late summer of 1900. It travelled stealthily, almost without notice, across the Atlantic Ocean. It struck Antigua, Cuba, and then the Florida Keys. American weather forecasters ignored the warnings of Cuban meteorologists as the storm careened across the Gulf of Mexico. It greeted the residents of New Orleans with heavy damage before turning its unrelenting eye toward the rich, vulnerable, soon-to-be-destroyed island of Galveston, Texas. It was Saturday afternoon, the 8th of September, when the warning came. The shifting storm teased the residents — yes, it will hit; no, it will not. By Sunday morning, the storm was gone, and so was most of the city.

"The wreck of Galveston was brought about by a tempest so terrible that no words can adequately describe its intensity, and by a flood which turned the city into a raging sea."
— Richard Spillane’s first-hand account, published in The New York Times, September, 1900

It was the deadliest natural disaster to ever hit the United States before or since, and it killed approximately 8,000 people — one in every five residents of the city. We don’t know how fast the wind was blowing because, after recording a wind speed of 100 mph, the measuring device was destroyed, and only estimates could be made. But it wasn’t the wind that did the killing. It was the water. 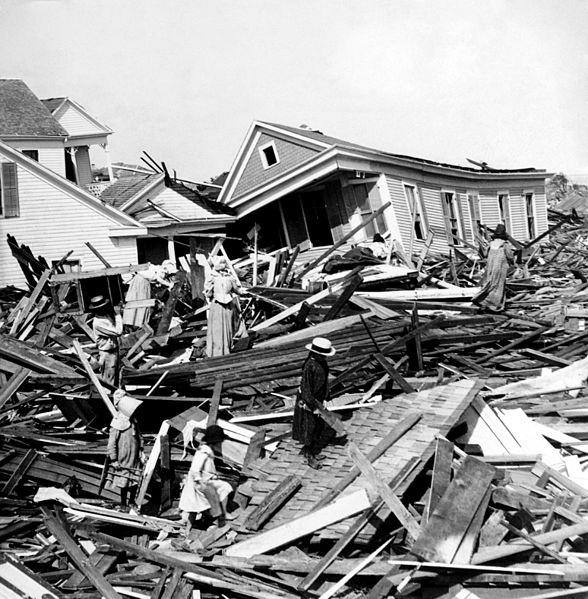 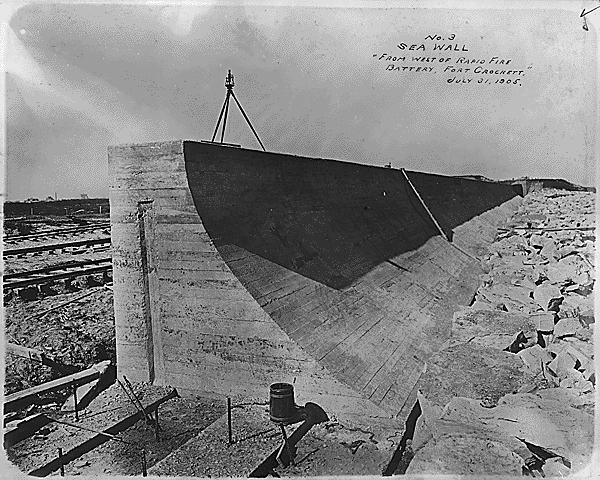 Galveston, basically a large sand bar, had an average elevation of fewer than nine feet above sea level. The storm surge that baptized the island was more than 12 feet high. All telegraph equipment was destroyed, and it took two days for word to begin to get out that Galveston and its residents were devastated.

In the picture at left, residents pick through the ruins of their houses, searching for anything they can salvage.

At first they tried to dump the bodies at sea because there were too many to bury, but the currents of the Gulf of Mexico brought them back to the island, where they washed up on the beach. For weeks after the storm, men collected and burned the bodies in funeral pyres.

Recovery took years, and Galveston never regained its place of prominence. The Great Storm ensured that Houston, not Galveston, would be the most important port city in Texas. In the picture at right, you can see the construction of the seawall, built after the devastation storm to protect the island.

The Great Storm was a hurricane — one of nature’s most fascinating and destructive phenomena.

Hurricanes are called tropical cyclones by meteorologists, and actually they are only called hurricanes in certain parts of the world. In the northwest Pacific, they are called typhoons, and in the Indian Ocean they are called cyclones. We will use these terms interchangeably, and it’s intriguing to see where these different names originated. 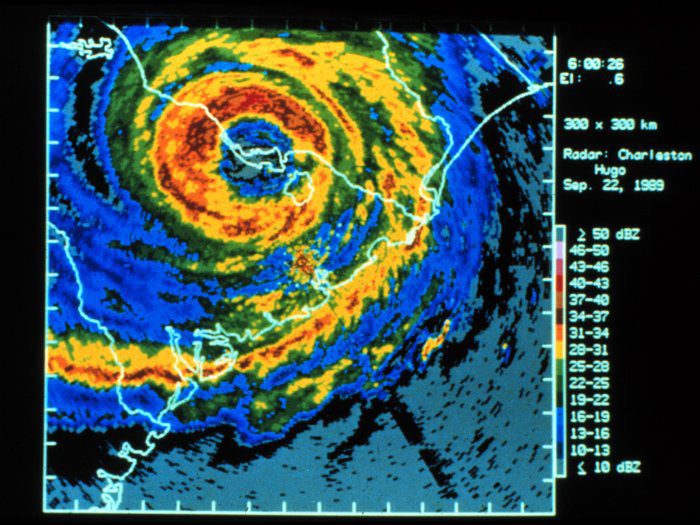 Hurricane: This word is interesting because it comes directly to English from the Spanish (instead of Latin). The Spanish explorers got the world from the Taino Native American language, in which it means "storm." Some people say that it also referred to a storm god, but that’s not completely verified. Because the letters "f" and "h" used to be interchangeable in Spanish, centuries ago "hurricane" was spelled with an "f." In fact, in Portuguese, it is still furacão.

The satellite image above is of Hurricane Hugo, a very large storm that hit land in 1989. In this image, it has already moved inland near Charleston, S.C. 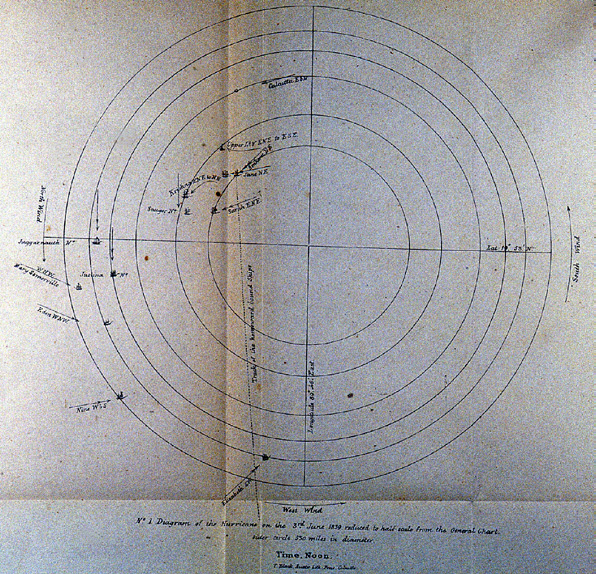 Cyclone: This word proves that you, too, can make up a word. A man named Henry Piddington, who worked for the British East India Company, created this word as a name for monstrous oceanic storms after witnessing one in December of 1789 in India. He adapted the word from the Greek kyklon, meaning "moving in a circle, whirling around." This is also related to kyklos, which means "circle." It has also been applied to tornadoes for 150 years. Sir Henry went on to study these storms and wrote a book about them for sailors. The picture above, drawn by Sir Henry, is important because it was one of the earliest pictures to show cyclones were circular and how they rotated. 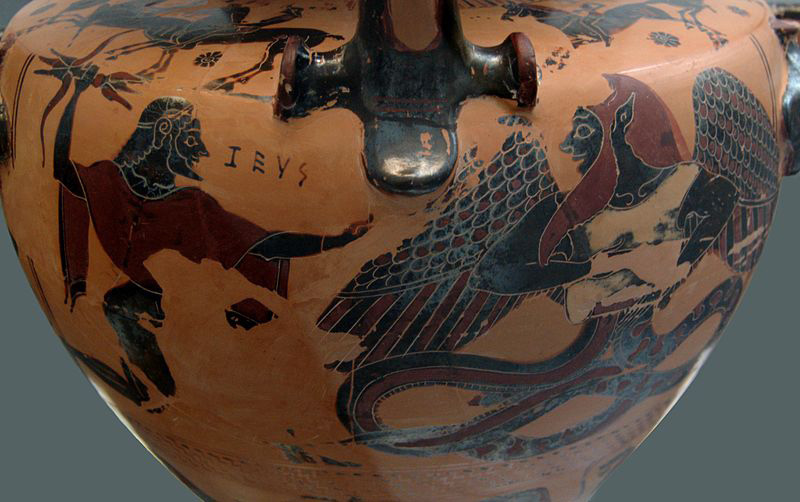 Typhoon: Pick an origin, any origin! There are several possibilities for the origin of the word "typhoon." In Greek mythology, Typhon was the son of Gaia and Tartarus. He was enormous, and he had 100 dragon heads on each hand. In the picture above, you can see Zeus with his thunderbolt ready to attack Typhon. Do you see how Typhon’s bottom half is a snake? It hissed! Scary! In Arabic, Persian and Hindi, there is a word tufan that means "big cyclonic storm." This word could have come to the Arabic from the Greek. In the Koran, Al-tufan refers to a storm or flood. In Chinese, tai fung is a big wind. In India, the word toofan is a big storm.

Willy-Willy: This is what they’re called in Australia! It’s an Aboriginal word that can also mean a dust storm.

You name it: Imagine that NOAA (National Oceanographic and Atmospheric Administration) has asked you for a new name for tropical cyclones that hit land in the North Atlantic (rare, but happens). They want a name that has some significance (the word has an appropriate meaning or a name with a history/background that is applicable). What would you name it, and why?

So, what are they? To be called a tropical cyclone, a storm has to meet certain conditions: 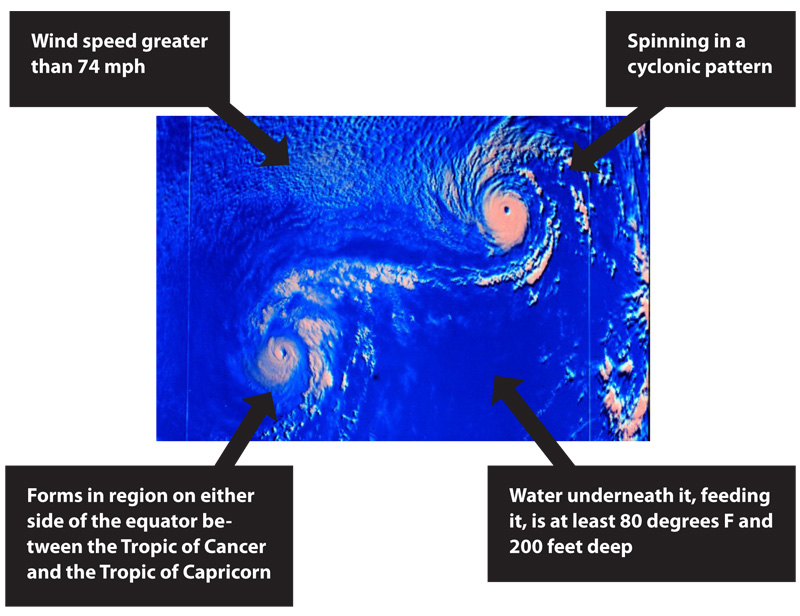 Watch this animation from CBS about how hurricanes form and follow the instructions below: 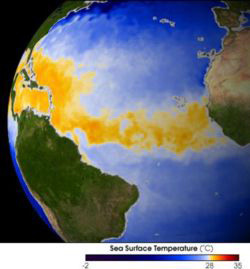 Sir Henry Piddington, the man who named cyclones, called the eye of a cyclone the "fatal centre." Why is this a good name, even though the eye is calm?

Read this article from The New York Times and then answer the questions regarding it.

Lesson 3: Analyzing the effects of a hurricane

In 1969, two scientists created a scale to rate the strength of hurricanes based on wind speed. The scale, called the Saffir-Simpson Scale after the two developers, is available at large with details about the types of damage that each level of hurricane can cause. Using this table on the National Hurricane Center website, complete the following activities: 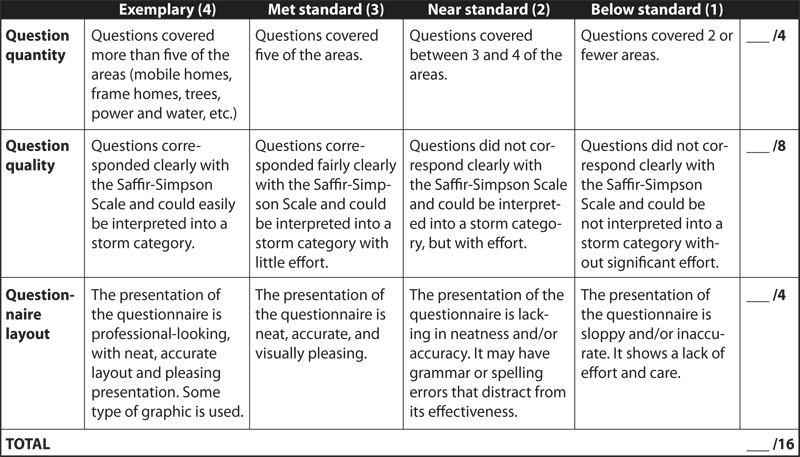 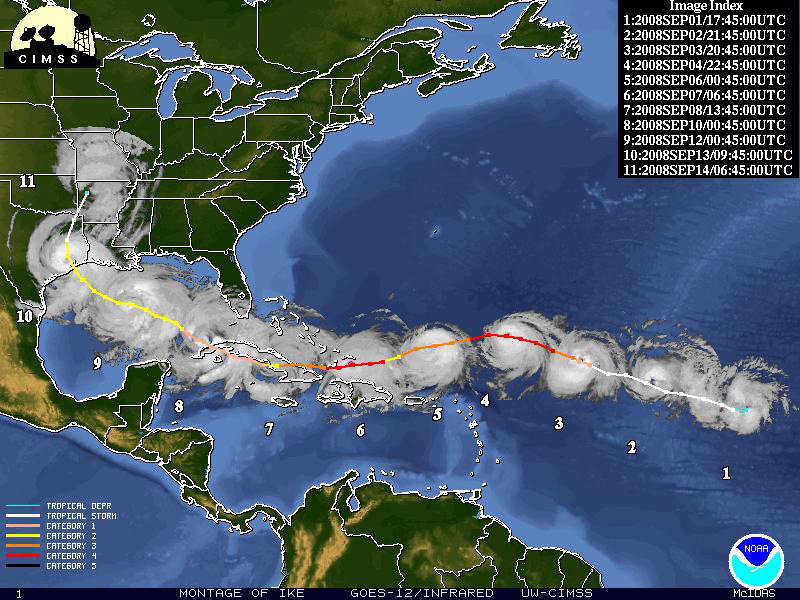 Head over to the Cooperative Institute for Meteorological Satellite Studies website and complete the activity below: Look at this image that shows hurricane strikes in the United States from 1950 to 2009. Use the image to answer the questions below.

As you read earlier, the Galveston hurricane was called "The Great Storm." You can see how calling storms things like "great" could get confusing when you are comparing many storms. During World War II, the military started giving women’s names to big storms in the Atlantic Basin, and then in 1950 the World Meteorological Organization decided to go to an alphabetical naming system that used the military’s radio code. This wasn’t a good solution, though, because you could end up with more than one storm with the same name, so they decided to rotate names and retire the names of truly significant storms, just like you would retire the jersey of a star athlete. In 1979, they added men’s names, too.

Even though there are 26 letters in the alphabet, they only use 21 letters for the names because some letters don’t have enough names that start with them. Can you guess which five they are? (The answer is at the very end of the assessment!) If there are more than 21 storms in a season, they start using the letters of the Greek Alphabet.

The names are cycled every six years, unless a name is retired. That means that the names used in 2010 will be used again in 2016. Because the Caribbean has Spanish- and French-speaking people, the names reflect those cultures as well.

Since tropical cyclones exist all around the world, different regions have different names. If you look at nhc.noaa.gov/aboutnames.shtml, you can find the naming systems for Australian cyclones, Indian Ocean cyclones and more! 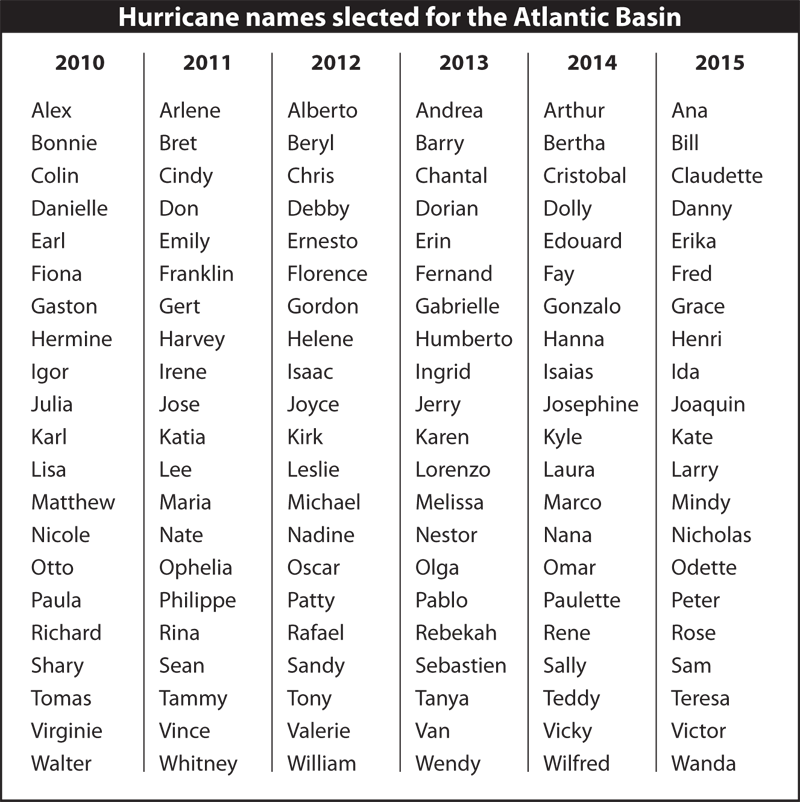 More tropical cyclones occur in the western section of the north Pacific Ocean than any other place (an average of 25+ storms and 16 cyclones a year) because the slightly warmer water covers a larger area. The Pacific Ocean is big! Look at the names for storms in the Atlantic Basin in the chart above. Do you see your name? Then use the chart to answer the questions on the next page. 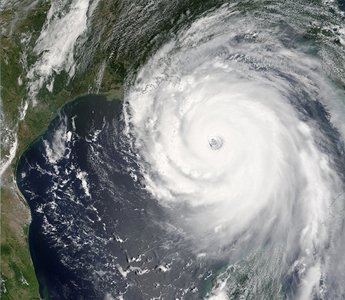 Hurricanes
The power of the sea