The shadow of the moon will provide an enlightening moment on Aug. 21, particularly for a lucky segment of the United States.

An eclipse occurs when the alignment of celestial bodies occurs so that one is obscured partially or totally by another. On Aug. 21, a rare total solar eclipse will occur. A total solar eclipse is seen from within the moon’s umbra (dark inner shadow). The moon appears to completely block the sun’s photosphere (bright, visible surface of the sun).

The event is being hailed as “the great American eclipse” because it will be the first total eclipse to cross the continental U.S. since 1918. The path of totality (the zone where the moon blocks the sun entirely and a shadow is seen) is within the United States alone. Residents in each state, including Alaska and Hawaii, will be able to experience at least a partial eclipse.

Eclipses occur when the sun, moon and Earth all come into straight line with each other. The moon is inclined 5.2 degrees above or below the Earth at any given time, which is why an eclipse in not a common occurrence. If you view a solar eclipse (or an eclipse of the Sun from Earth), the moon and sun look to be exactly the same size. They are not. This illusion happens because the sun is 400 times the diameter of the moon and the Sun is 400 times farther away than the moon.

With the next total eclipse not until April 8, 2024, this year’s event is not to be missed — but take the proper precautions. Don’t be blinded by the light — or think that you are safe because there is not the full sun in the sky. It is just as powerful and intense and even a quick glance can cause permanent damage to your eyes.

Activities to do during the eclipse

CoronaCorona [kuh-roh-nuh] The outer part of the Sun's atmosphere. The corona is visible from Earth during a total solar eclipse. It is the bright glow seen in most solar eclipse photos. • EclipseEclipse [ih-klips] The total or partial blocking of one celestial body by another. • LunarLunar [loo-ner] Of, determined by, relating to, or resembling the moon. • PenumbraPenumbra [pi-nuhm-bruh] The area of partial illumination surrounding the darkest part of a shadow caused by an eclipse. • Path of TotalityPath of Totality Where observers will see the Moon completely cover the Sun for about two and a half minutes. • UmbraUmbra [uhm-bruh] The area of total darkness in the shadow caused by an eclipse. 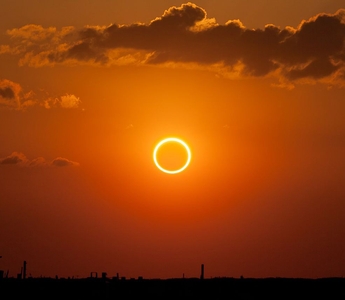