Peas in a pod: Genetics

All children are curious about why they look the way they do. Adults frequently comment to them that they have their "mother's eyes" or their "father's chin." This lesson plan will introduce children to the basics of heredity in an approachable way. Genetics is a subject that can occupy an entire lifetime of study, and this lesson is meant to be an introduction. If your child is interested in further exploration, please see the extension activities at the end of the lesson plan.

Genetics is the study of how you became the way you are. Everyone inherits traits, or qualities, from their parents, but before Gregor Mendel, no one was quite sure how that happened. Even smart scientists like Charles Darwin had it all wrong. They thought traits were blended like paint. They believed that if a tall person and a short person had a baby, the baby would be of medium height.

Then, in the 1800s, along came Gregor Mendel, a priest with an interest in science and horticulture (the study of plants). He was very curious about how traits were passed from one generation to another. He started experimenting with mice, but people complained, so he switched to peas. He experimented with peas (29,000 plants!) for seven years and used mathematical principles to figure it all out.

That brings us to a question: when someone says two people are as alike as peas in a pod, what does that truly mean? How alike are two peas in a pod? Mendel found out they can be very different. He identified eight different traits that followed the pattern he devised, although it turns out there are many more.

Mendel determined that traits aren't blended but are instead passed on, intact, from parent to child. He found that everyone got two genes for each trait — one from the mom and one from the dad. Believe it or not, at the time it was a big deal to figure this out.

He also concluded that some traits are dominant and some are recessive. Dominant traits show up even if you also have a different gene for the same trait; the gene that doesn't show up is the recessive one. For example, if you have a gene for dimples in your cheeks and a gene for no dimples, you will have dimples because dimples are a dominant trait. The way you look on the outside is called your phenotype; the way you really are deep down in your genes is called your genotype.

One of the most amazing things Mendel discovered was how traits appeared to skip a generation. Mendel took a tall pea plant and crossed it with a short one. He expected medium pea plants, but what he got was all tall pea plants! Mendel then crossed these tall babies (he called them the F1 generation) and he got three tall plants and one short plant! What's up with that? He used what is called a Punnett Square to show what happened.

Originally, we know one parent is tall and its genotype is TT (remember, we're talking about what you look like in your genes, and you have two alleles, or gene options, for each trait), so we put those letters on one side of the square. The other parent is short and its genotype is tt, so we put those letters on the other side. Every baby plant gets an allele from each of them. So when they have four pea babies, look what happens!

Look carefully at the square. What do each of these pea babies look like? They're all tall because, in peas, tall is dominant. Are they all truly tall deep down in their genotype? No! They're half tall and half short, but the short doesn't show on the outside (their phenotype).

The really amazing thing is when the F1 Generation has pea babies. We call them F2 (they're the grandbaby pea plants of the first group). Looking at this Punnett Square, can you tell how many look tall? (Hint: the ones with a big "T" look tall). How many look short? How many look tall but are really a combination?

Because three look tall, we call this a 3:1 phenotypic ratio. Whoa, hold on there! We're using math! We'll do more of that later, but think of it this way: there are four possibilities, right? Of the four, three look tall, and how you look is your phenotype. So, we have three tall to one short in this generation.

Can you figure out the genotypic (what it really is, not just what it looks like) ratio if we go in order of all tall, hybrid (mixed), all short? What did you get? Check the "Did you know" section on the next page to find out if you're right.

Mendel figured this same thing out with eight different traits found in peas. Not everything about you is inherited this way (the things that are we call "Mendelian traits"), but other scientists have found out that more than 4,000 traits are!

Answer to ratio question above: Did you get 1:2:1? That's correct.

Ideas to remember: Can you answer these questions with words you've learned?

Can you draw out some possibilities?

Some other cool words:

Lesson 3: The math of Mendel 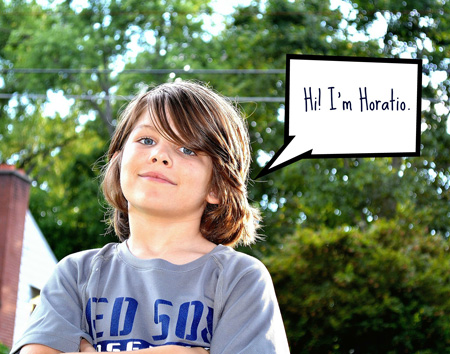 I love math. Especially ratios. (Get it? Ratios? I also love bad jokes.) I love Mendel Math because Gregor Mendel loved ratios. He liked probability, too, so I think you'll probably like that. Get it? Probably?

Let me tell you about ratios first. I know you're saying to yourself, "Horatio, what do I care about ratios?"

Well, let me tell you, you use ratios all the time. For instance, let's say you buy a bag of candy and your mom makes you share it with your brother. You divide it fairly — say, one piece for him, two for you — until the bag is gone. In the end, for every two pieces of candy you have, he has one. It doesn't matter if there were 30 pieces or 120, it's still the same. You now have a two-to-one ratio of your candy to his. That takes a long time to write, so we put it like this: 2:1.

Ratios can be very helpful because, if your brother tattles to your mom that you didn't divide the candy fairly, you can just tell her you used a 2:1 ratio to do it. She will be so impressed that she won't care that you cheated your brother. See how it works? 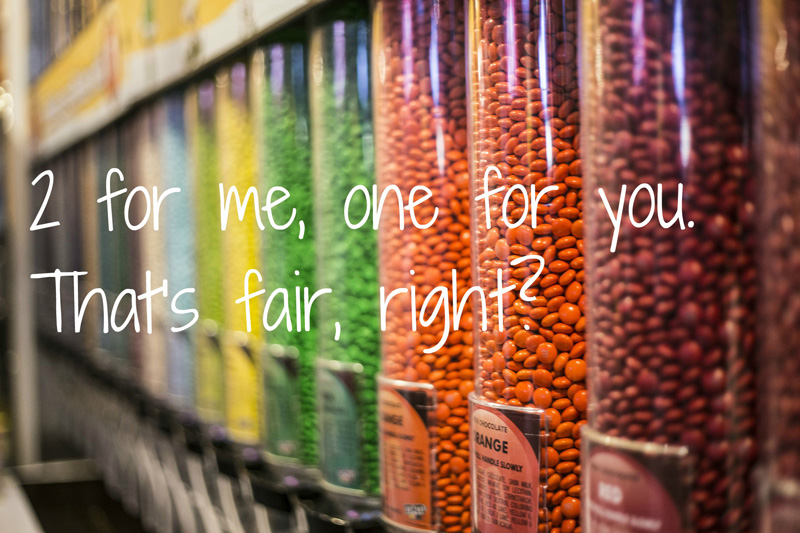 Mendel used ratios to describe what happened in his experiments without using a lot of words. Instead of saying, "There were three tall plants and one short plant in the such-and-such generation," he just wrote "3:1 ratio tall to short" and everyone knew what he meant. So, if there were 16 plants altogether and 12 of them were tall plants, there would be four short plants because, for every three tall ones, there would be one short one. How simple is that? Ratios are easy, and I love easy.

If it weren't for loyalty to my fantastic name, I'd probably like probability even more than ratios. Probability is very cool! Have you ever asked your dad if you can stay up until midnight on a school night? If so, he probably said, "Your chances are slim and none." Well, probability tells you exactly what he means by that.

Probability is ranked on a scale of 0 to 1. One is something that is definitely going to happen — like the probability that your mom is going to make you brush your teeth sometime this week is 1. A zero is something that is definitely not going to happen. For instance, your teacher is definitely not going to tell you that, because you're such a great kid, she's going to buy you a new skateboard and let you ride it in the hall at school. The probability of that event is 0. (I mean 0! If it's not, will you tell me who your teacher is?)

Most things or events fall somewhere in between, so they're a fraction because all the numbers between 0 and 1 are fractions, or pieces. So if there are four people in your family and your dad brings home a cake and cuts it into four pieces, the probability of your getting one of them is one out of four, or ¼, right? (Well, if you bribe him, your chances might change, but that's a different thing.)

Mendel used probability to explain why things didn't always do what he thought they would when he grew all those peas. (By the way, do you think he made people eat all those peas? Just wondering. I like peas almost as much as bad jokes.)

Anyway, you know already that if two pea plants that were each hybrid (heterozygous) for tall (Tt) were cross-cultivated to grow another generation of pea plants, we'd expect three of the babies to look tall and one to look short, right? Well, it doesn't always work out exactly that way.

With every new baby plant, you start over with your chances. You have a 3 out of 4 chance of getting a tall baby pea plant, but you might get three short plants in a row because every time you grow a baby pea plant, your chances are 1 in 4 that you will end up with a short one. What happens, though, is that if you raise a lot of pea plants, you will see that 3:1 ratio you were expecting. This is called the Law of Large Numbers. It makes me happy just to say that phrase: Law of Large Numbers. No, really, try it.

If you want to learn more about probability (What am I saying "if" for?), check out our Probably Probability lesson plan.

You will now be the geneticist! 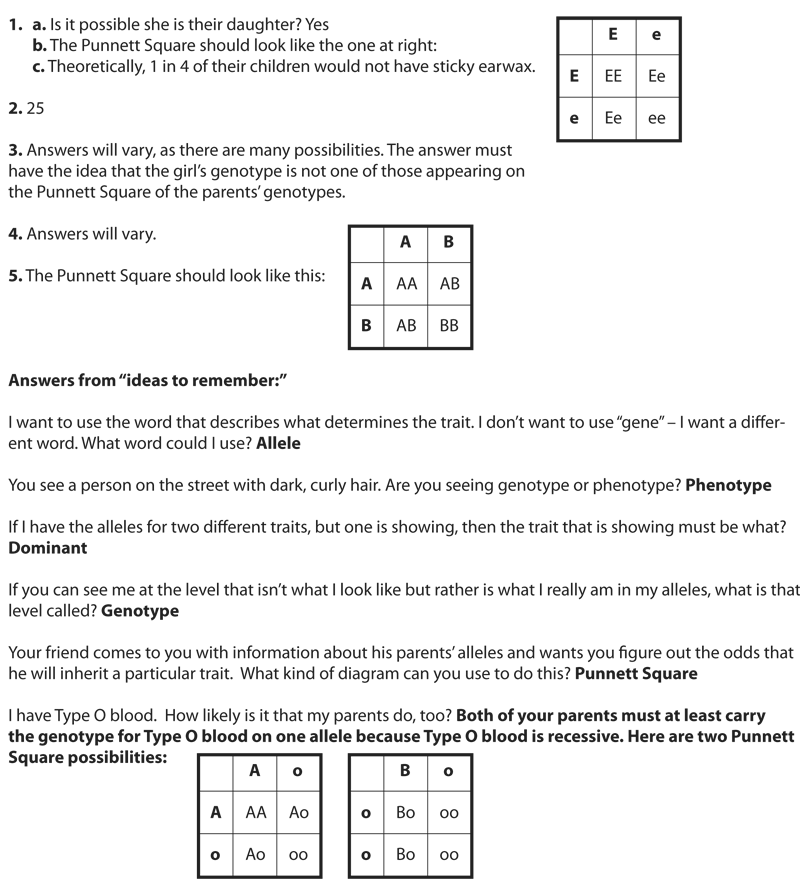 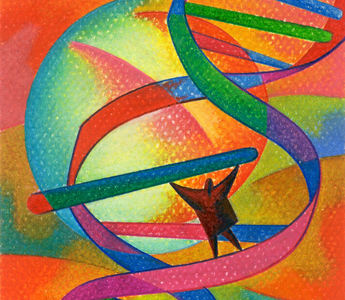 Peas in a pod: Genetics
How Meddelian genetics shapes us