Did you know that the ratio of the circumference (the distance all the way around) to the diameter (the distance across) of a circle always equal the same number? The number begins 3.1415, and no matter how many decimal places you take it to, it never ends! This crazy (well, mathematicians would call it irrational) number is called pi. Its symbol looks like this: π

March 14 is Pi Day! (Because it's 3/14; get it?) In honor of this international celebration, we've put together 3 math lessons and 14 math activities for you to enjoy. All the details are in the Showtime! section, but here's a quick list of supplies to get you started.

Here is the stencil for the Pi Day Couture project. Print it out and then cut it out.

Showtime!
3 math lessons: These grade-appropriate lesson plans can be viewed online at MenasforKids.org

Here are 14 Pi Day Activities that you can do for fun and learning at home or at school.

Even the youngest mathematician can participate in this activity! Different colored paper strips are paired with numbers (e.g., blue for 2, red for 4). The strips are then linked in the order of π (3.1415…). The chain can be as long or as short as time and interest allow.

Since π is all about circles, foods like cookies or pancakes make great Pi Day foods. Here are recipes for Pi Day Cupcakes and our secret Mensa frosting recipe, along with other Pi Day food ideas!

Inexpensive plastic beads twisted onto pipe cleaners or jewelry-making chains from the craft store can be used to create mathematical bling!

What you do:
Like the paper chain in activity #1, you will choose a color of bead to represent each number from 0 to 9. Thread the corresponding bead in the order of π to make a bracelet (on pipe cleaner) or a necklace (using yarn, etc.). Voila! Wearable math bling!

It's easy to rock this cool Pi Day look!

Pi Day isn't just for math junkies! Readers and writers have a role as well. Here are some things budding writers and savvy readers can do to celebrate this amazing number.

The admirable number pi: three point one four one. All the following digits are also just a start, five nine two because it never ends. It can't be grasped, six five three five, at a glance, eight nine, by calculation, seven nine, through imagination, or even three two three eight in jest, or by comparison four six to anything two six four three in the world. The longest snake on earth ends at thirty-odd feet. Same goes for fairy tale snakes, though they make it a little longer. The caravan of digits that is pi does not stop at the edge of the page, but runs off the table and into the air, over the wall, a leaf, a bird's nest, the clouds, straight into the sky, through all the bloatedness and bottomlessness. Oh how short, all but mouse-like is the comet's tail! How frail is a ray of starlight, bending in any old space! Meanwhile two three fifteen three hundred nineteen my phone number your shirt size the year nineteen hundred and seventy-three sixth floor number of inhabitants sixty-five cents hip measurement two fingers a charade and a code, in which we find how blithe the trostle sings! and please remain calm, and heaven and earth shall pass away, but not pi, that won't happen, it still has an okay five, and quite a fine eight, and all but final seven, prodding and prodding a plodding eternity to last.

Do you get close?

All it takes is a few minutes with a Spirograph to remind you how fun drawing a plain circle can be!

Use Martin Gardner's Spirograph to see that same idea on the computer.

(We need to give credit for this idea to Martin Gardner, a mathematician who wrote about cool things to do with math in Scientific American).

Go to this site to calculate your age in pi years.

Read about π in these books:

Watch movies or TV shows that feature π and/or math:

Celebrate Pi Day with a special song! Sing the song below to the tune of O, Christmas Tree.

Can you write one yourself? Listen to Pi by Kate Bush to get an idea!

Try this "magic" trick on a friend.

No matter how big your circle is, you will always be able to cut three pieces with a little bit more left over. You have cut pi!

Once upon a time, there was a state legislature that almost tried to dictate what π is really equal to!

In 1897, a mathematics hobbyist in Indiana calculated some complicated (and, as it turned out, incorrect) "mathematical truths," which he then copyrighted. He talked his state representative into introducing a bill that would, among other things, round π off to a normal number like any other instead of accepting the beautiful irrationality it really has — and, in exchange for adopting this bill, the Indiana school system would be able to use his copyrighted "truths" free of charge.

The bill included three numbers that people could use for π in different situations:

The bill was actually even more complicated than this, but nonetheless it was passed by the House of Representatives. In the Indiana Senate, it would have passed and become a law except that there happened to be a mathematics professor present who read it and had a heart attack right there on the spot. Well, not a real heart attack, but he was surprised to say the least. He made sure the bill died right then, and it was never heard from again. Pi was the winner and still irrational champion!

Create cards to send to friends and family celebrating Pi Day (or Einstein's Birthday — one in the same!).

You may use any of the following ideas for things to write on the cards, or come up with some of your own:

You can also decorate with π by downloading this poster.

Turn the numbers into a tune. 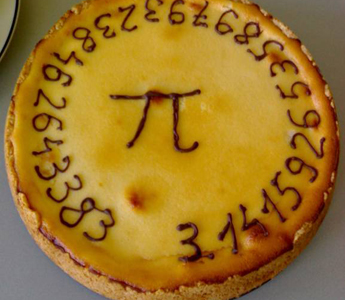